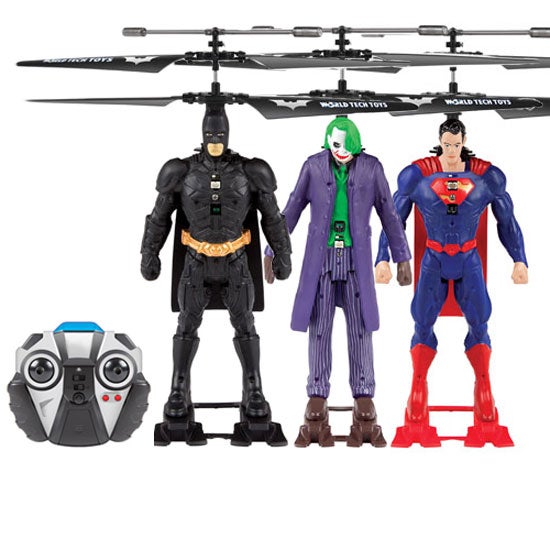 “The folks over at Hobbytron have just sent us an e-mail touting their new line of DC Entertainment-licensed RC helicopters.

When you read “Look, up to the sky…it’s a bird, it’s a plane…it’s a flying Superman helicopter,” it’s esy enough to expect that the e-mail you’re opening will offer a look at a pretty standard toy chopper with Superman branding on the side, a la the line of “Superman at 75″ Matchbox cars released last year.

From World Tech Toys (and apparently licensed some time ago because they’re still using the DC Comics logo that went out of fashion at the start of the New 52), though, we get the image above — helicopters that actually look like Superman (in his New 52 costume, but minus the collar — so a bit like the first wave of post-relaunch action figures from Target), Batman and the Joker (both appearing as they did in Christopher Nolan’s The Dark Knight).

Here’s the official blurb for the product, with a link to purchase inside:

Fun anytime of the year, but especially in celebrating graduates big day, Father’s Day and the ideal time before Comic Con rolls around this summer – the three channel infra-red control copter have two rotors allow for precise movement- go forward, backward, up, down, left, right and hover.    Easy to fly – both inside and outdoors – the DC Comic copters (Superman, Batman and Joker) also feature LED headlights, and a built-in rechargeable battery pack.

Check it out here: http://www.hobbytron.com/WorldTechToysJoker2CHIRRCHelicopter.html

You can view the PDF of this article here.